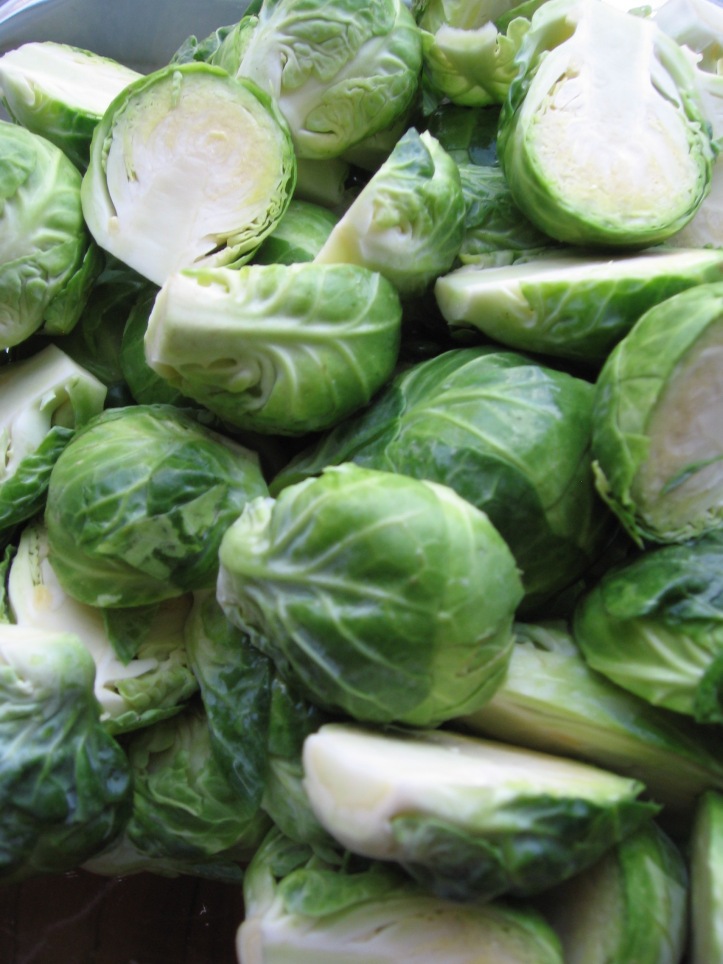 Wait!  Don’t go.  Please.  Before you say yuck and chalk this up to bad judgment on my part, give Brussels sprouts one more chance.  I, too, was a skeptic.  Steamed and boiled Brussels sprouts produce a reaction in me that can be compared to that of a five year old given a plate of broccoli.  In short, I’ll give up dessert to avoid eating them and might just throw a temper tantrum if the issue is pressed.  For years, my house was a Brussels sprout free zone.

My husband, I am embarrassed to admit, is actually a fan of Brussels sprouts in all their forms and last fall, he used all of his diplomatic powers to have our home’s embargo against sprouts lifted for one dinner.  Finding myself in what was obviously a delusional state, I was contemplating granting his request and was flipping through cookbooks when I came across a recipe for pan-browned Brussels sprouts in Ruth Reichl’s The Gourmet Cookbook.  The head note read that “these golden-brown nuggets are so nut-like in flavor that you could almost serve them with drinks” and that this recipe had actually made people like Brussels sprouts.  At the time, I thought they might get more takers if they just stuck to encouraging people to drink while eating Brussels sprouts, but I made the recipe and, drum-roll please, was a convert.

Even if you are sure you hate Brussels sprouts,  go straight to your grocery store or farmer’s market and buy some.  In season from late August through March, now is the time for Brussels sprouts and once you try this recipe you’ll be glad you have several months of sprout eating ahead of you.  The recipe in The Gourmet Cookbook only uses pine nuts, but I found that the addition of sherry-soaked currants provides the perfect complement to the nutty flavors of this side dish.  Great for an easy weeknight supper, I’ve also prepared this recipe in advance and then re-heated it for company on a sheet pan in a 350 degree oven.  No matter when you decide to make them, make more than you think you will need.  I’m guilty of eating leftover sprouts straight from the refrigerator. 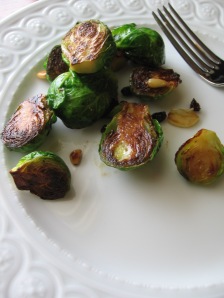 Combine sherry and currants in small bowl and set aside to soak for at least 20 minutes.

In a large, heavy skillet, melt butter and olive oil over medium heat.  Briefly sauté garlic until fragrant and lightly browned.  Remove garlic from skillet and set aside.  Place Brussels sprouts, cut side down, in skillet.

For lightly browned sprouts, sprinkle with pine nuts and reduce heat to low.  Cook, uncovered, for 10 minutes.  Remove skillet from heat and add sherry and currants.*  Place back over heat and cook until sherry has almost evaporated.  Toss sprouts with sautéed garlic and season with salt and pepper.  Serve sprouts immediately.

For darker, more caramelized sprouts (see picture), cook Brussels sprouts, uncovered, for 5 minutes over medium heat or until desired brownness is achieved.  Add pine nuts for last minute or two of cooking.  Remove pan from heat and add sherry and currants.*  Place back on heat and cook until sherry has almost evaporated.  Toss sprouts with sautéed garlic and season with salt and pepper.  Serve sprouts immediately.  These Brussels sprouts will be more crisp than the lightly browned Brussels sprouts due to the shorter cooking time.

*Remember to remove the pan from the heat before adding alcohol as it is highly flammable.