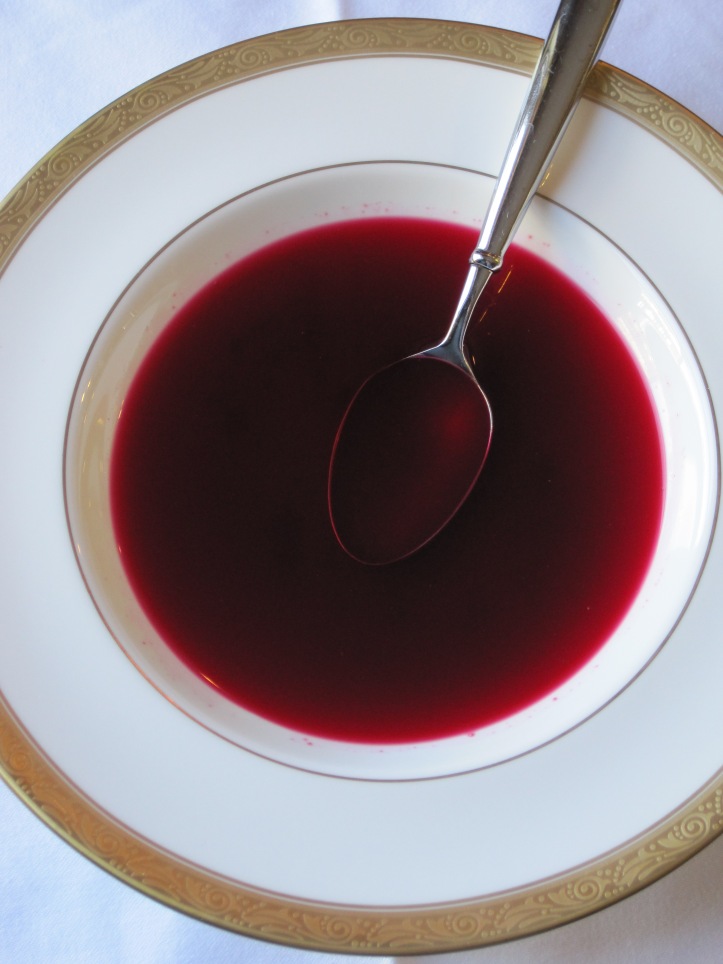 Call me tacky, but all I wanted to make for Valentine’s day was a red soup that could be garnished with a heart made from cream.  A soup like this, I thought to myself, would be the ultimate culinary expression of my love. Borscht, the soup made from fresh beets that originated in Russia and Poland, is red and thus became my soup of choice.  This despite the fact that my special valentine hates beets and would not be compelled to eat them just because I used them in a soup that was cute and holiday-appropriate.

Recipes for borscht are plentiful.  Google the word borscht and you’ll find recipes for borscht with beef, borscht served hot, with mushrooms or with potatoes, and on, and on, and on.  While it was hard to narrow it down, I ultimately decided on The New York Times recipe for “Ukrainian Christmas Borscht”  from earlier this year.  The recipe calls for cooking the beets with water and white vinegar in one pot, while cooking the other ingredients in chicken broth in another pot.  After simmering the vegetables for about thirty minutes, you strain both pots and then combine the broths to make the soup.

The recipe sounded good, but I figured I could make it even better by blending the vegetables with the broth to form a purée.  This, I reasoned, would make a soup that was thick enough to garnish with a cream heart.  I want to apologize now for what was a horrible idea.  If you choose to  make this soup, harness your inner tacky and don’t purée the vegetables with the broth.  Yes, blending the vegetables does make it possible to make a heart out of cream in your soup.  I have a picture to prove it.  But blending the soup does not make it silky smooth.  Rather, it makes the soup grainy which is not only unpleasant to look at, but is also unpleasant to eat.  Sure the heart is cute, but the soup is…well…not.

Conversely, straining the vegetables from the broth gives you a soup that is nothing short of sexy.  Simple, classic, and elegant, this soup is the  culinary equivalent of a dozen red roses.  Dark, purplish-red in color, it is translucent and glistens in the spoon and in the bowl.  The vinegar adds tang, while the warm broth makes it comforting on a cold winter day.  And even my beet-hating husband thought it tasted delicious!

So forget the chocolates, the champagne, and the hearts made of cream.  Buy a bunch of beets and say I love you with borscht.  Happy Valentine’s Day!

Valentine’s Day Borscht
Serves 4
Adapted from the recipe for “Ukrainian Christmas Borscht” featured in The New York Times (January 6, 2010)
Beets are extremely messy to work with as their juices tend to not only bleed, but also stain.  Using a food processor minimizes the mess, but be careful to not let the beets touch anything that will stain easily (i.e. a wooden cutting board).

Quarter the beets and then place them in a food processor. Using the pulse setting, coarsely chop the beets.

In a medium saucepan, combine the beets, the vinegar, and three cups of water.  Bring to a boil, then reduce the heat to medium-low and simmer the beets for 30 minutes or until the beets are tender.  Strain the beets and set them aside.  (Save the strained beets for use on a salad at a later date!)

In another pot, combine the carrots, onion, chicken broth, bay leaf, and allspice berries and bring to a boil.  Reduce the heat and simmer for 30 minutes or until the vegetables are tender.  Strain the vegetables and aromatics from the broth and discard the strained ingredients.

Combine the chicken broth with the beet broth and stir to combine.  Season the soup with the sugar, black pepper, and salt.  Serve hot and if desired, garnish with a sprig of dill.