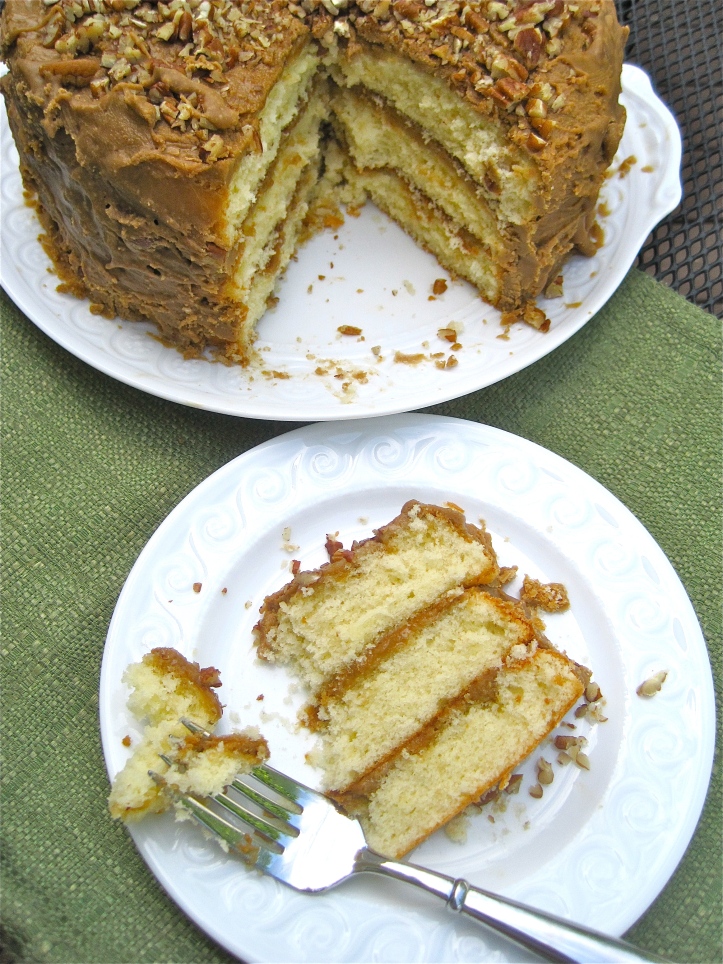 Caramel cake is not for the faint-hearted.  Affectionately referred to as burnt sugar cake, it’s a specialty of the deep South and a tradition in my family. Growing up, a birthday wasn’t complete without this tender cake and its tooth-hurting, thick, sugary frosting.  While its fat and sugar content is enough to make you cry “uncle,” I promise you’ll have no problem ignoring this painful truth as you cut yourself a second piece.

This recipe originated with my Great Grandmother Ida in New Bern, NC and was further adapted by my grandparents’ housekeeper Mora.  Mora mastered the cake and as such, got her name attached to it.  Mora’s caramel cake has been the birthday cake of choice for my father and me for years and my mother lovingly turned them out each fall. Yet it wasn’t until I attempted to make the recipe myself that I realized what a labor of love it was.  While making the cake is simple, the icing requires resolve and a little luck.

As the recipe details, making the icing requires you to combine three ingredients in a saucepan and then bring them to a boil.  Simple enough, right?  Not so fast.  A year or so ago, when I requested the family recipe from my mother it came with several pages of notes.  Years of frustration and late nights making caramel cakes for her family had yielded some good information for troubleshooting the icing. Before making the icing for the first time, review the following hints courtesy of my mother:

And finally, a little advice from me: take it easy on yourself if it doesn’t turn out perfectly the first, second, or third time around.  Persevere with the frosting and just get it on the cake.  Every caramel cake that I’ve made looks like a 10-year-old smeared the icing on, but nobody seems to notice after that first sweet bite.  Happy baking!

Knowing not to mess with a good thing, I just made a couple of small changes to this recipe.  I reduced the baking temperature from 350 degrees to 325 degrees and added a pinch of salt.  The original recipe lists flour but does not specify which kind to use.  I used cake flour instead of all-purpose as I think it makes for a lighter and more tender cake.

Place a rack in the middle of the oven and preheat the oven to 325 degrees.  Grease and flour 3 (9-inch) cake pans.  Set aside.

Using the paddle attachment of an electric mixer, begin to beat the butter at medium-high speed.  Slowly pour in the sugar and beat until light and fluffy.  Add the eggs, one at a time, beating until just incorporated.

In a small bowl, whisk together the cake flour, baking powder, and the pinch of salt.  In another small bowl, combine the whole milk and vanilla extract.

Divide the batter equally between the 3 greased cake pans.  Bake on the middle rack in the oven for 10 minutes.  Rotate the pans for even cooking and cook for another 10 minutes.  Test the cakes with a toothpick; if a toothpick inserted in the center of the cake comes out clean the cake is done.  If done, remove from oven.  If additional baking is needed, bake for another 2 minutes before checking it again.  Be careful not to over-bake the cake. Cool the cakes on wire racks for 10 minutes.  Remove the cakes from the pans and continue cooling on the wire racks.

To make the icing, combine the light brown sugar, unsalted butter, and evaporated milk in a heavy-bottomed saucepan.  Bring to a boil over medium heat, stirring often.  When mixture is boiling, reduce the heat to medium-low and cover (the mixture should still be at a boil).  Boil for 5 minutes (don’t stir it during this time).  Uncover the mixture and pour it into the bowl of an electric mixer with a whisk attachment.  Allow the mixture to cool for 2-3 minutes then sprinkle with the baking powder.  Beat on high speed (careful as the mixture may splash out and burn you) until the icing begins to thicken and lighten in color.  Note: The icing will be thick and syrup-like for several minutes before it starts to thicken; you will worry that you have done something wrong.  Don’t panic and keep beating!

When the mixture is thick enough to spread, stop beating and start icing the cake immediately.   Spread about ½ cup of icing between each layer and use the remaining icing to ice the outside of the cake. If the icing begins to harden while you are icing the cake, simply put the hardened-icing in a microwave-safe bowl and microwave for 15-20 seconds.  Repeat as needed.  If using, sprinkle the chopped pecans over the icing before it hardens.

Caramel cake can be served immediately.  Wrapped in plastic wrap and placed in a resealable bag, it can also be frozen.  I like to divide the cake in quarters and freeze it.