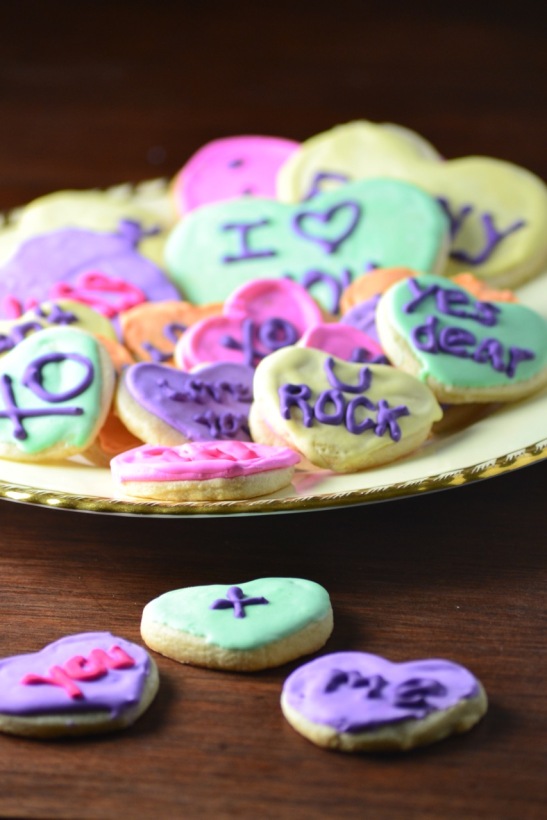 Back in 1987, we didn’t reduce our thoughts to 140 characters or describe complex feelings with an emoticon.  I think the closest we came to such a thing might be conversation hearts on Valentine’s day.

And it was stressful. Despite a solid choice of Strawberry Shortcake Valentine’s Day cards for the occasion, even as a 7-year old I knew there were social pitfalls lurking.

I’m pretty sure my mother bought conversation hearts, chalky and totally disgusting, as a defense against her own lack of self-control around candy. As her daughter, this decision proved challenging.  After all, the idea of conversation hearts is to communicate and I certainly didn’t want any of my 1st grade classmates getting the wrong idea.

Conversation hearts with messages like “Hey You,” “Hello” and “Awesome” were mundane, far from controversial and set aside to be used only for the boys in my class. There were never enough of these commonplace sayings however which meant that progress on my Valentine’s day cards would slowly come to a halt as I painstakingly considered every message.

Does “Be True” suggest commitment or is it just an admonishment to be honest?  What about “Ask Me?”  Like ask me on a date? 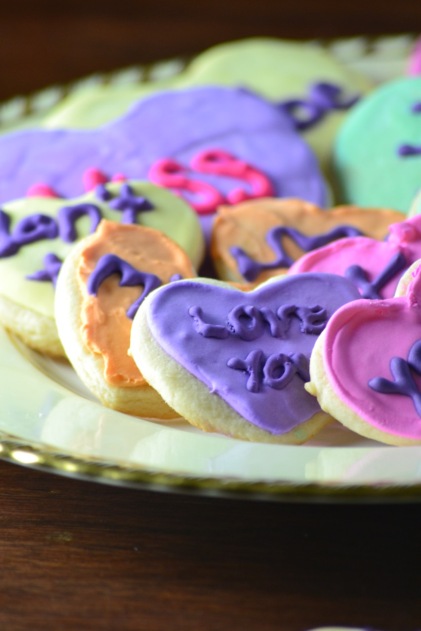 With cheeks blazing at the mere sight, hearts inscribed with “So Fine,””Soul Mate,” and the brazen “Kiss Me” were quickly discarded.  The thought of one of these loaded missives ending up in a male classmate’s envelope still makes me start to sweat.

Eventually I finished the task and the next day at school, still naive on the differences between boys and girls, I opened my cards with anticipation as I was sure that everyone, including members of the opposite sex, had devoted the same diligence into selecting the card and the candy as I had. I looked for amorous meaning in everything and time on the playground was spent obsessing over what exactly it meant that both my best friend and I received “I ♥ You” hearts from the same guy.

This Valentine’s Day I got the urge to revisit the conversation hearts of my youth, but to improve on the gustatory experience by conveying my feelings on delicious cookies instead of the ubiquitous candies.   As the baker and author, I got to control the message and even helped my husband along with love maxims sure to make his wife swoon.  For the record, “yes, dear” gets me every time. 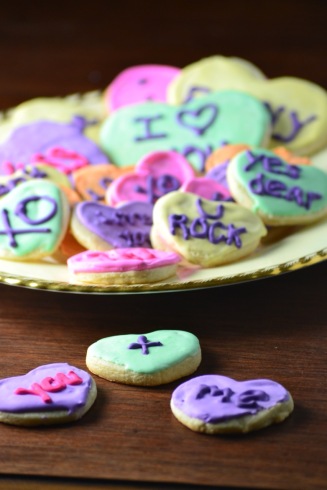 Here is my basic recipe for sugar cookies followed by my recipe for Royal Icing for decorating. This is my go-to recipe, but I also like the recipe for Basic Sugar Cookies found on Sweet Sugar Belle.  It yields a slightly firmer cookie than my recipe, the dough doesn’t require refrigeration, and it holds its shape well during baking.

Place a rack in the middle of the oven and preheat the oven to 375 degrees.

Sift together 1 ½ cups flour, baking powder, and salt. In the large bowl of an electric mixer, beat the butter and sugar on medium-high speed until light and fluffy.   Add the egg, vanilla, and milk and beat on medium speed until just combined.   Add the flour mixture.   Beat until combined. Add up to ½ cup more flour to the dough, mixing to incorporate, until the dough is just thick enough to roll. Chill for at least three hours.

Place the dough on a lightly floured surface and roll out to ¼-inch thickness. Use cookie cutters to cut out cookies in desired shapes and place on an ungreased baking sheet. Pick up the scraps and repeat with the remaining dough.

Bake the cookies for 8-10 minutes; cookies should still be soft. Remove from the oven and cool for five minutes on the baking sheet before transferring to a wire rack to cool completely.

Royal Icing is ideal for decorating cookies. I recommend doubling the recipe if you plan on using a lot of colors during decorating – you’ll be glad for the extra icing.

In an electric mixer, beat the confectioners’ sugar, dried egg whites, vanilla, and warm water on low speed until combined. Increase the speed of the mixer to medium and beat until the frosting is thick and has a glossy sheen, about 4 minutes.

Decide how many colors you will want to use for decorating and divide the icing into that many portions.   For the conversation hearts, I used 7 total colors: pink, purple, green, yellow and orange for icing the cookies and a darker purple and darker pink icing for piping the text.   Place each portion of icing in a small bowl and color with the desired food coloring.

If you plan on using a particular color for writing messages or another intricate design, you’ll want to thin it with a small amount of water. The icing should be about the consistency of toothpaste. Not so thick that you can’t pipe it, but also not so thin that it doesn’t hold its shape when piped onto your cookie. To achieve this result, I like to sprinkle water a little bit at a time over the icing. Stir the icing to fully incorporate the water and then continue stirring and sprinkling the icing with water until you achieve the desired consistency. Fit a piping bag with a Wilton Number 3 tip and fill the bag with the icing. Repeat with any additional icing that you plan to use for writing and set aside until ready to use.

For filling in cookies with icing (known as “flooding”) you’ll want an even thinner icing that is more easily spreadable. To achieve this, sprinkle water a little at a time over the icing and stir until the icing becomes the consistency of shampoo: thick, but easily spreadable. Once you achieve the desired consistency, place a funnel over a squirt bottle and use it pour the icing into the bottle. Repeat as needed until you have several bottles with different colors.

To make Conversation Heart cookies, trace the outline of the cookies with icing using the squirt bottles. Let dry for a few minutes and then flood each cookie with more royal icing in the same color. Use a knife to smooth the icing and then let dry to the touch. For a shiny icing surface, dry the cookies under a fan.  Once dry, use the thicker icing in the piping bag to write messages on each cookie. Allow the writing to dry to the touch before storing cookies in an airtight container.