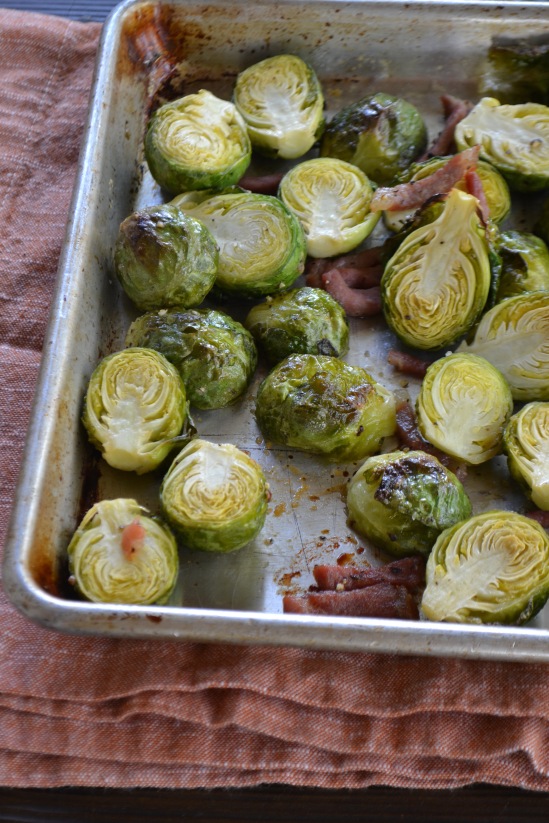 When it comes to vegetables, my favorite way to prepare them is roasting.   Everything tastes better after time in a hot oven.  Take broccoli, cauliflower, and especially Brussels sprouts as prime examples.

Brussels sprouts, like beets, elicit a strong reaction from people.  You are either firmly in favor of these tiny green cabbages or the mere mention of their cruciferous name causes you to draw back in horror.  While not always the case, people in this latter category typically got to know brussels sprouts through stewing.

I don’t think their mothers or fathers meant to scar their palates for a lifetime, but they simmered brussels sprouts until they were a sad army green color and served up huge spoonfuls to their clearly repulsed children.  The effects of exposure to over-cooked brussels sprouts are real and are no laughing matter. 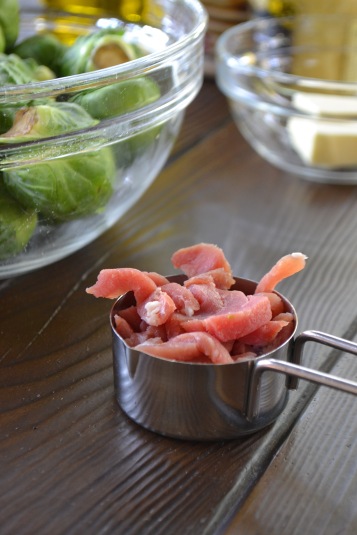 For years now, I’ve included brussels sprouts on menu proposals for dinner parties and cooking classes in the hopes of helping people move past their earlier encounters with this vegetable.  Most people politely ask for a different option, but those that say yes with a hesitant, if not open, mind are almost always surprised by how different brussels sprouts taste when they are cooked using a dry-cooking method.

Roasted in the oven or seared on the stove, brussels sprouts become more nutty with a mustard taste that is beguiling.   Seasoned generously with salt and a little pepper, they fly off the baking sheet faster than I can get them to plates at my house. Irresistible is how I would best describe them.

Brussels sprouts roasted with just a drizzle of olive oil, salt and pepper are fabulous, but here I fancy things up with the addition of maple syrup, dijon mustard, and butter.  I toss tiny lardons of country ham with the sprouts for some salty, porky deliciousness to create a final dish that showcases brussels sprouts with the perfect balance of sweet and salty.  If you’ve been scarred by over-cooked brussels sprouts perhaps it’s time to conquer your fear and try them again.  Happy cooking!

Maple syrup might seem an odd pairing with Brussels sprouts, but it works.  Combined with the country ham it makes for a side dish with the ideal balance of sweet and salty pulled together with a little Dijon mustard.  Yum!

In a small bowl, whisk together the melted butter, maple syrup, olive oil, and Dijon mustard.

Combine the halved Brussels sprouts and country ham in a large bowl.  Pour the butter-maple mixture over the ingredients and toss to coat.  Season with salt and freshly ground black pepper.  Sprinkle salt with a light hand as country ham is salty.

Dump the brussels sprouts onto the baking sheet and spread them out for even cooking.  Roast for 20 minutes or until golden brown and crisp-tender.   Serve immediately.