This past spring, my husband went turkey hunting with his cousin in South Carolina.   Judging from the stories he animatedly told when he came home, they had a great time.  They imitated hen mating calls and tracked the amorous response of excited male turkeys by foot and, at times, on hands and knees, through thick brush.  They saw two turkeys from afar and came home empty-handed.

I’m tempted to explore the differences between men and women in this post, but I’ll just let that last paragraph stand on its own.  Draw your own conclusions; I’ll only add that women aren’t the only complicated ones. 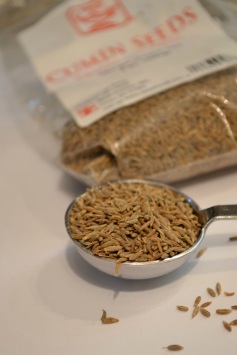 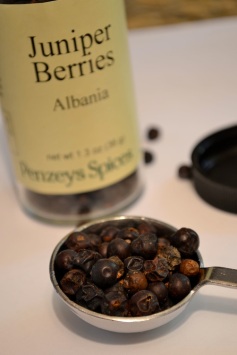 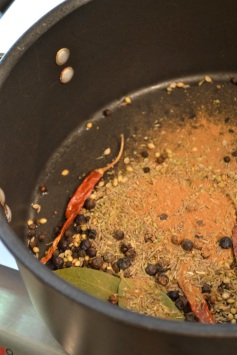 Back to food, one of my favorite blogs to follow is Hank Shaw’s Hunter Angler Gardener Cook.   His cookbook, Hunt, Gather, Cook: Finding the Forgotten Feast is a favorite of mine, and I love his approach to both finding and cooking his food.   His passionate respect for the land and sea and the creatures that inhabit both is contagious.  I’ve tried many of his recipes and never been disappointed. 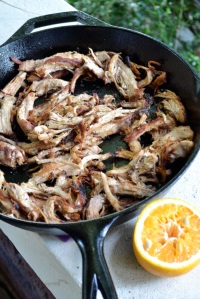 Wild game isn’t easy to get on your plate.  Yes, restaurants feature elk, bison, duck, and boar on their menus, but these are farmed products and are subject to the same quality and processing controls as beef, poultry and pork.  It’s illegal in the United States to hunt game and then sell it to a restaurant or a consumer for consumption.  True wild game finds its way to your kitchen through your own hands or through the generosity of a sportsman or woman.  Packed into Ziploc bags, wild game is a gift that I’ll always welcome with open arms and growling belly.

I adapted this recipe for Wild Turkey Carnitas from Hank Shaw’s blog.  Shortly after my husband’s hunting trip, I emailed him the recipe to encourage him to get out there again.   He forwarded it on to his cousin and in return, a few months later my husband came home bearing a gift of wild turkey breasts and instructions to make these carnitas and send pictures.   Consider that request done.  Happy cooking! 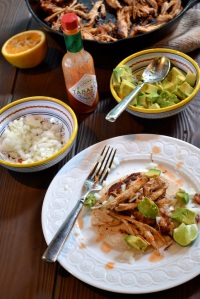 If using breasts instead of thighs or legs, be careful with your heat.  You’ll want to have a steady simmer and the breasts will cook quicker than bone-in thighs or legs.  I was multi-tasking when making this recipe and when I finally checked on the meat, my liquid was boiling instead of gently simmer which may have contributed to a slightly drier texture.   I’d be more careful about watching this in the future and would also recommend using thighs or legs in place of the breast.

If wild turkey isn’t available to you, feel free to make this recipe with domestic turkey, chicken, or pork shoulder.   Shaw recommends drizzling the browned turkey with honey at the end. I prefer to omit the honey and sprinkle the shredded turkey with brown sugar during browning.  It adds a hint of sweetness and aids in caramelizing.

If the skin is still on the turkey remove it.   Place the turkey in a large Dutch oven and add all the herbs and spices.   Add enough water to just cover the meat and bring to a simmer.  Cover and simmer gently for 3 hours or until tender.

When the turkey is tender, remove the turkey and allow it to cool.  Use your fingers or two forks to shred the turkey.  Discard any bones.   Reserve about 3 cups of the shredded turkey to brown for carnitas.  The remaining meat can also be browned or stored in the refrigerator and used for other purposes

Add the canola oil to a large heavy bottomed frying pan (I like to use my cast iron skillet) and heat over medium high heat.  When hot, add the 3 cups and sprinkle with the brown sugar.  Stir only occasionally, letting the meat get brown and crispy, until it is done to your liking.  Season to taste with salt and pepper.

Remove the pan from the heat and drizzle the meat with the orange juice.   Adjust seasonings if needed.  Serve atop warmed corn tortillas with Tabasco hot sauce, lime wedges, chopped onion and avocado.  Enjoy.