It’s hard to beat banana bread.  It requires the use of an ingredient that is on its last legs (that brown and mushy banana in your fruit bowl is just perfect), demands minimal time to make, and a moist loaf, sitting on one’s counter, is a hit with anyone.  Yes, anyone.  I have never met someone who doesn’t like banana bread and frankly, would prefer not to meet the person who passes on a slice. 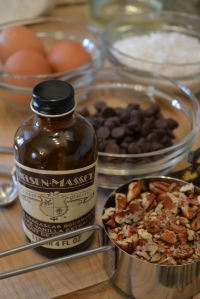 I posted my favorite recipe for banana bread years ago on Minced.  My mother made it for my brothers and me growing up and so in addition to being ridiculously tasty, I also like it because it tastes like home and a mother’s love.  It’s a classic for sure, but that hasn’t stopped me from experimenting with other recipes. 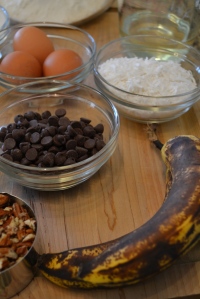 Last year, I read a piece in Bon Appetit magazine about Julia’s banana bread in Maui.  It was a terrific article.  One that made this hungry traveler forget about the beaches and volcanos of Hawaii and instead want to book a plane ticket for the sole purpose of purchasing a warm loaf.   Maybe in 2014… 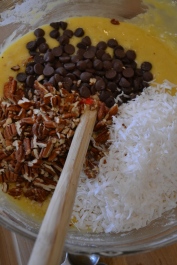 The recipe for Julia’s banana bread is very good, but I got the inkling to have a little fun with it.   Chocolate chips, unsweetened coconut flakes, chopped pecans, and vanilla extract all got added to the recipe and this moist, flavorful loaf is the result.   The road to my kitchen lacks waterfalls, palm trees, and gorgeous beaches, but one bite of this bread will take you there. 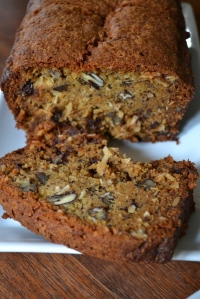 I typically don’t mess with a good thing, but in this case I’m glad I did.  The addition of semi-sweet chocolate chips, unsweetened coconut flakes, chopped pecans, and a touch of vanilla to the recipe for Julia’s Best Banana Bread featured in the March 2013 issue of Bon Appetit magazine make irresistible banana bread that is far from ordinary.

Preheat the oven to 350 degrees and place a rack in the middle of the oven.  Grease and flour a 9 x 5-inch loaf pan and set aside.

In a medium bowl, whisk together the flour, baking soda, and salt and set aside.  Whisk the eggs, sugar, mashed bananas, vegetable oil and vanilla extract in a large bowl.  Stir in the flour mixture until just combined.   Stir in the chocolate chips, coconut flakes, and pecans.

Scrape the batter into the greased loaf pan.   Bake for 65 to 70 minutes or until a skewer stuck in the middle of the loaf comes out clean.  Don’t worry if the bread seems to get very dark as it bakes – it’s not burning! Remove the loaf from the oven and let cool in the pan for 10 minutes before turning out on a wire rack.  Allow to cool for at least 30 minutes before slicing and serving.