I’d never heard of crawfish (also known as crayfish or crawdads) until college when my best friend from Galveston, TX mentioned them.  She would smile as she talked about the parties that were held in their honor.  Crawfish boils where everyone stood around drinking beer, while the crawfish were boiled with corn and potatoes and then generously sprinkled with Tony Chachere’s seasonings before being devoured by drunk and hungry Texans.

Since life is funny, my best guy friend in college (who would later become my husband) would be from Galveston and would  love crawfish as well.  He would be with me when I first tried them at Al T’s; a restaurant at a desolate interstate exit in Winnie, Texas.  Here I would try my first boudain balls and then enjoy crawfish etouffee for lunch.  My husband’s oral history of the crawfish and their home in the muddy rice fields of Southeastern Texas and Louisiana did not deter me from eating every bite. 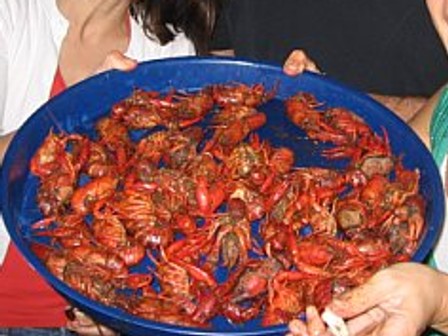 From crawfish etouffee, it was an easy jump to go to my first boil.  Easter 2006 in Galveston, I extracted my first crawfish from it’s shell and feeling ambitious, I sucked the juice and other morsels from its head while licking my fingers clean of every drop of Tony Chachere’s.  With mouth pleasantly on fire from the spice, I reached for another crawfish while taking a gulp from the plastic cup, which now held my quite warm keg beer.  As I savored the taste, I realized that I had been missing out.

Things only got better when my future mother-in-law presented me with my first crawfish bread.   A boule or loaf of bread stuffed full of succulent crawfish and Monterrey Jack cheese that when baked, becomes warm, gooey, and oh-so-to-die-for.  In no way good for you, this is the snack that you’ve dreamed about all your life.

My husband and I visited Galveston for Easter this year.  Six months after Hurricane Ike slammed into the island things are far from normal. Which is why it was such a special treat to follow the tradition and eat crawfish on Easter again.  The annual crawfish boil occured and while the day was overcast and windy, the crawfish tasted as good as ever and my beer quickly warmed up in its small plastic cup.  I needed a quick refresher on twisting the tails off, but after a slow start I was popping crawfish into my mouth and licking my fingers clean.  After I had eaten more than my fill, we returned home to my mother-in-law’s fabulous crawfish bread.  Dozens of crawfish later, I was satiated enough to begin to contemplate the awful fact that several months would pass before I would be able to eat crawfish again.

* My husband was aghast that I did not mention TexJoy as an appropriate crawfish seasoning.  This is certainly another option.