I’ve wanted a cast iron skillet for a long time.  Words like homey, heirloom, and Southern would come to mind every time I thought about it.  I knew that if I owned a cast iron skillet I would season it to perfection, never let soap near it, and that I would fry chicken, bake cornbread, and sear pork chops happily for the rest of my days.  I would make food for family, comforting and approachable, and as everyone gathered around my table they would delight in the sight of steam rising from some delicious concoction in my skillet.

We don’t even have children yet, but I was already daydreaming about the day when my treasured and well used cast iron skillet would be handed down to a grandchild.   With fitting solemnity,  I would hand the skillet to that chosen child and he or she would know that this was the ultimate family heirloom.  Yes, if it hasn’t dawned on you yet, I was obsessed with owning a cast iron skillet.

And then last night I got one.  And it’s perfect.  My husband gave it to me as a birthday gift.  It’s a 12-inch Lodge Logic pre-seasoned skillet.  He had considered getting me a used cast iron skillet that  had already been seasoned for years by another person, but wisely thought better of the idea.  Not that a used skillet would have been bad, but I wanted to know the culinary history of my skillet and every dish that it would help prepare.

To that end, let this serve as documentation that on this 27th day of September in 2009, Brown Sugar Coffee Cake is the very first dish I baked using my skillet.  Buttery with toasted pecans, the cake tasted delicious with coffee and looked especially beautiful against the shiny, black patina of my very new and very wonderful cast iron skillet. 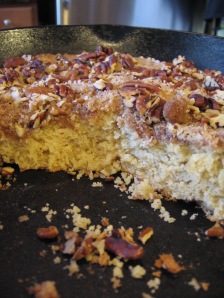 Preheat the oven to 350 degrees.  Generously grease a 12″ cast iron skillet with butter.

Beat the butter and brown sugar in a large bowl with an electric mixer until fluffy.  Add the eggs, one at a time, beating after each one until just combined.  Using a rubber spatula, stir in the sour cream and vanilla extract.  Combine the flour and baking powder in a separate small bowl.  Gently fold the flour mixture into the butter mixture.  Spoon dough (it will be thick) into the skillet and spread evenly.

Meanwhile, combine the flour, light brown sugar, and cinnamon in a small bowl.  Using your fingers, rub in the butter until evenly blended.  Cover dough with the sugar mixture and then sprinkle with the chopped pecans.

Bake the cake for 35 minutes on the center rack.  Allow to cool slightly before serving.