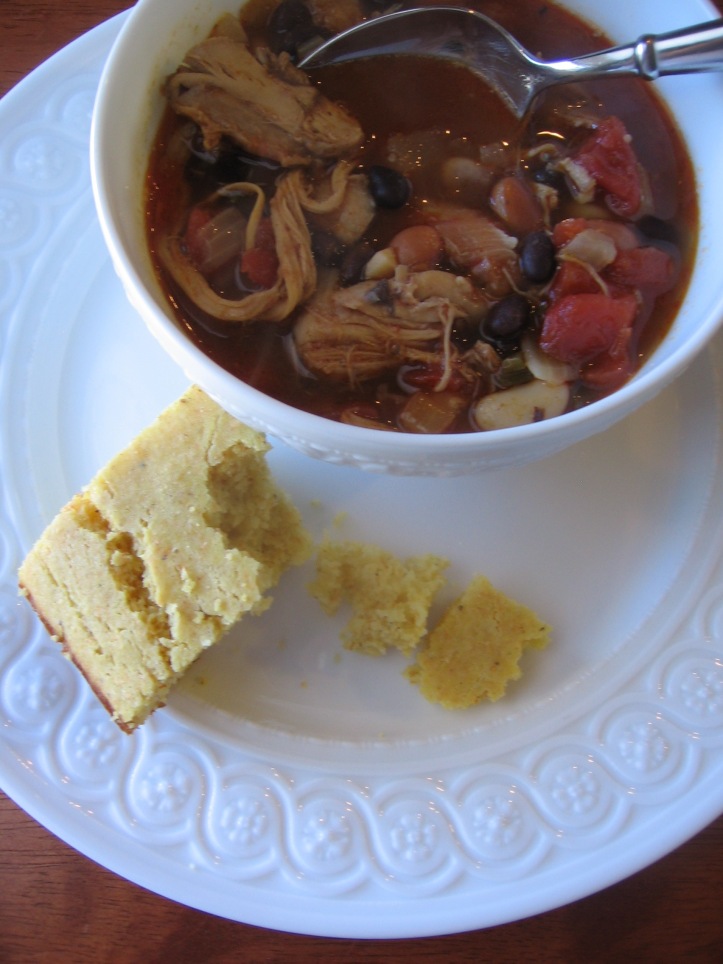 For weeks now, I’ve been meaning to post a recipe for gameday chili.  I’m not a big football fan, but give me a bowl of chili and some cornbread and I’ll cheer for all four quarters (provided you refill my chili bowl!).  To me, chili and football just go together and there are few recipes for chili that I don’t like.  I’ve made and enjoyed a kielbasa and black bean chili, a traditional meat and kidney bean chili, and, of course, the Texas style chili which lacks beans but has plenty of large chunks of beef.  Recently, a friend wrote raving about a chicken and white bean chili that she had enjoyed at a dinner party.  Her suggestion that I include a similar recipe on my blog got me thinking.

After fooling around with some ideas, I created this recipe for a chicken chili that features three different types of beans.  It can best be described as a traditional chili with chicken instead of beef.  The cayenne adds some heat (I actually added 1/2 teaspoon cayenne when I made it) and the addition of the beans makes this a filling dish.  Definitely serve this chili with cornbread as the two pair so well together. And while some may yell blasphemy at what I’m going to say next, even with my Southern roots, I have to admit that when it comes to chili I prefer the sweet compliment of a Northern cornbread t0  its Southern counterpart.

If you feel like changing the recipe, don’t be intimidated.  This recipe adapts easily.  For example, if you wanted a white chili then add another cup of chicken broth, use three cans of Great Northern beans, and omit the tomatoes and chili powder.  Want to use beef instead of chicken?  That’s fine, just use a reduced-sodium beef broth instead of the chicken broth.  In truth, the only mistake you can make with this chili is to not make enough.  It freezes beautifully so make an extra-large batch for a later date.  Happy eating and go team!

Carefully remove any excess oil from the Dutch oven so that only two tablespoons of oil remains.  The excess oil can be discarded.  Over medium heat, cook the onions and garlic until softened about five minutes.  Add the chili powder, cumin, and cayenne and stir for about one minute.  Add the chicken broth, beer, two cans of diced tomatoes, and the jalapenos to the pot.  Return the chicken thighs and any juices to the Dutch oven and bring to a boil.  Once boiling, reduce heat to medium-low, cover, and let simmer for 20 minutes.

Remove the chicken thighs from the pot and place on a cutting board.  Shred the chicken using two forks as it will be hot.  If you like the texture of chicken skin, you may certainly leave it in the chili just be sure to cut it into smaller pieces.  Or, if you prefer, discard the skin at this point.  Return the shredded chicken to the pot and add the Pinto, Black and Great Northern beans.  Simmer, uncovered, for another 25 minutes or until liquid has thickened slightly.  Serve with cornbread and one or all of the optional toppings.

Handling Hot Peppers:
Tolerance for hot peppers varies from person to person.  If you are sensitive to peppers, you will notice your hands tingling or even burning after handling one.  There are a couple of ways to avoid this unpleasant sensation.  Wear plastic gloves or put your hands in plastic bags while working with peppers.  The ribs and seeds of peppers carry the most heat so do your best to avoid touching this part of the pepper.  After slicing a pepper in half, I like to use the tip of a vegetable peeler to scoop out the insides (see the picture).  It’s an effective way to get rid of the insides without having to use your fingers!