How to Roast Chestnuts

From the outside, it must have appeared picture-perfect.  My brothers and I in flannel pajamas knelt playing in front of a warm fire.  A record played Christmas carols in the background and our Christmas tree flickered merrily with lights.   The seasonal favorite, “Chestnuts Roasting on an Open Fire,” had been our inspiration.  And my mother, wanting our first taste of chestnuts to be authentic, had ignored the oven for the real deal: our happily blazing fire.  Playing the role of domestic goddess beautifully, she had carefully arranged about 2 dozen chestnuts near the flames.

It wasn’t until the second loud pop that our scene of domestic bliss became something out of National Lampoon’s Christmas Vacation.  Like popping popcorn, it began slow, but quickly accelerated.  Bits of hot chestnut shrapnel went hurtling across the room as the chestnuts began exploding in quick succession.  As our living room became a holiday battleground, my mother screamed for us all to seek cover. 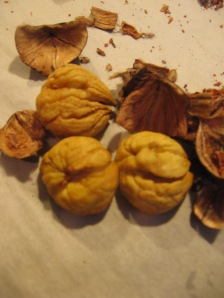 My brothers and I have always known that we had one heck of a great mom, but she proved it that night. Not only had she created an explosive display worthy of the 4th of July (albeit unintentionally), but she was also going to save us from it.   As we watched with glee, safely behind the couch, she used the fire screen as a shield to try to move the few remaining chestnuts from the hearth.  The holiday season has always brought my brothers and I surprises and fun, but that night roasting chestnuts on an open fire took its place right up there with Santa as a holiday favorite.

Unfortunately, that was the last time we ever roasted chestnuts on an open fire.  While my mother learned that pricking chestnuts with a fork is not sufficient, the fact that we kept finding bits of chestnut in the rug and in the couches for weeks afterwards put an end to the possibility of a future fire roasting.  We did however continue to roast chestnuts using the far less exciting oven and they have remained a favorite of mine ever since.

Chestnuts, the fresh kind, not the type you find in a jar, arrived at my grocery store about two weeks ago.  Fresh chestnuts only appear for about 6 weeks around the holidays here in North Carolina.  Consequently, you have to make the most of them and I bought a bag with plans to add them to a rice pilaf I was making.  While chestnuts can be used in soups, stuffing, desserts, or just eaten plain they need to be roasted and shelled before being used.  And while I’d love to get advice on successfully roasting chestnuts on an open fire, you’ll find mine roasting safely in the oven.

Roasted Chestnuts
Choose firm and plump chestnuts to roast.  While chestnuts in their shells can be stored in a cool, dry place, once you remove the shell you should refrigerate the chestnuts.  I find that chestnuts are best roasted the day you buy them as they tend to dry out and become hard the longer they sit on your counter.

Preheat the oven to 400 degrees and place a rack in the center of the oven.

Using a sharp paring knife carefully cut an “x” into the shell of each chestnut.   Be careful.  Most chestnuts have a flat side and you should be sure to place this side on the table before cutting the “x” to keep the chestnut from moving.  Try to just cut through the shell, not the fleshy nut underneath.  Don’t skip this step as the cut allows steams to escape and prevents the chestnut from exploding.

Spread out the chestnuts on a parchment-lined baking sheet with the cut side facing up.  Bake for 20 minutes.  Allow to cool slightly before opening the chestnuts.  Some people advise that you wrap the chestnuts in a towel and squeeze the towel to break up the shells.  I find this to be somewhat ineffective and that it is easier to break the shell open using the curled-up edges of the “x.”  Once you remove the shell, remove the brown, bitter skin that surrounds the actual chestnut.  A shelled chestnut will look like the chestnut on the left in the following picture: 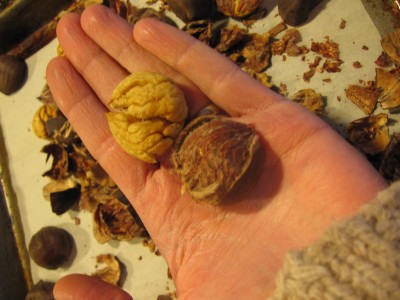 Eat the chestnut directly from the shell or serve with another dish.  Enjoy!