The first days of a new year typically bring about a flurry of decluttering in our house, but this year’s commitment to the task has been particularly earnest.  After almost two years of attempting this thing called parenting, I feel like we finally have gotten to the point where we can tackle some long-lingering house projects.  This has meant shredded paper, numerous trips to the Salvation Army with donations, and lots and lots of organizing.

Intrigued by the kon-mari method, an approach to organizing that has quite the following, I ask myself which items bring me joy as I tackle closets, dressers and file drawers. When I started to clean the basement, I came across this doughnut pan. Doughnut pans, for those who are curious, always spark joy and a serious craving for home-baked doughnuts. 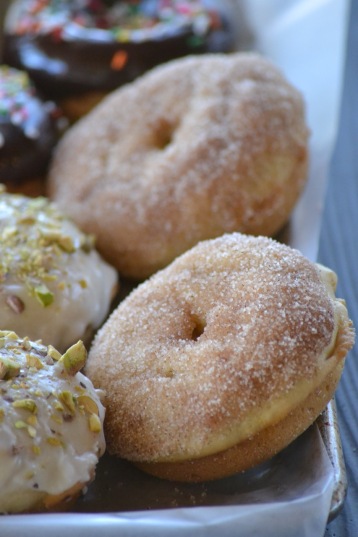 So instead of cleaning the basement I baked buttermilk donuts.  And then I procrastinated a bit more by decorating some with chocolate and sprinkles, others with a lemon glaze and chopped pistachios, and then dipping the remaining three into butter before dredging in cinnamon and sugar. 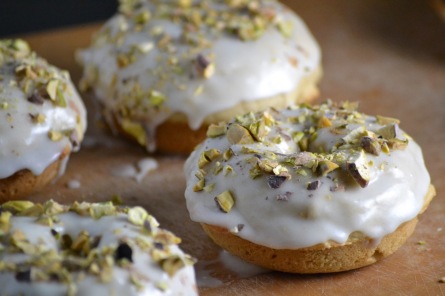 The basement still hasn’t been cleaned, but my cravings have been satiated and I’m feeling quite joyful.   Happy cooking! 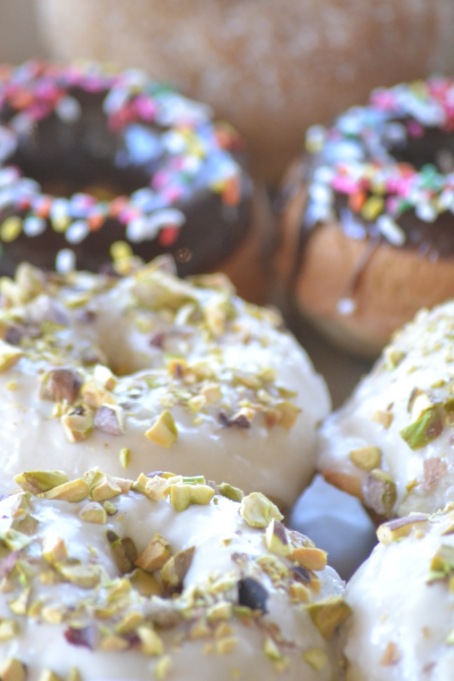 This basic recipe for buttermilk doughnuts is good on its own, but even more fun when dressed up with delicious toppings. I suggest three ways to decorate these doughnuts below – try all three or pick your favorites.

And because I was wondering too, here’s the deal on doughnuts vs donuts.

Preheat the oven to 425 degrees.   Grease two (6-doughnut) doughnut pans with butter and set aside. If you only have one pan, plan to bake the doughnuts in two batches.

Beat the butter, oil and sugars together with a paddle attachment in the bowl of an electric mixer until light and creamy.   Add the eggs, one at a time, beating well after each addition. Add the baking powder, baking soda, salt and vanilla and stir to combine.   Add the flour to the butter mixture alternating with the buttermilk; start and end with the flour and beat on low until everything is combined.

Spoon the batter into the greased doughnut pans and fill to just below the rim. Wet your fingers with a little water and gently smooth the tops of each doughnut.

Bake the doughnuts for 10 minutes. Remove from the oven and let them sit in their pans for 5 minutes before turning them onto a wire rack to finish cooling. Eat doughnuts as is or decorate as described below.

For chocolate glazed doughnuts, combine the chocolate chips, 4 teaspoons corn syrup, vanilla extract and butter in a medium bowl. Microwave in 15-second increments, stirring after each time, until mixture is smooth and flows easily off a spoon. If mixture seems too thick, stir in another teaspoon of corn syrup. Dip the top of the doughnuts in the chocolate mixture to coat and sprinkle with sprinkles. Set aside to set and then enjoy.

For cinnamon-sugar doughnuts, combine the sugar and cinnamon in a medium bowl. Dip the top of a doughnut in the melted butter and then immediately dredge it in the cinnamon-sugar mixture. Set aside or enjoy immediately.

For lemon-glazed doughnuts, combine the powdered sugar, corn syrup, 1 tablespoon milk, and lemon juice in a medium bowl until smooth. If too thick, add another ½ tablespoon of milk and stir to combine. Dip the top of a doughnut in the lemon-glaze and then sprinkle with chopped pistachios. Set aside to set and then enjoy.